Toyota has taken the covers off the four-door sedan version of its best-selling Corolla.

The new Corolla sedan promises a sportier appearance than its predecessor. Up front, it looks near-identical to the hatch – it pairs the same LED headlights with a wide, big-mouthed grille. Around the rear, the taillights are connected by a chrome strip, as part of a design that is clearly inspired by the larger Camry. The model we’ll be getting in Australia is the Chinese-market model – the US model gets a different front fascia, with a more aggressive look.

One powertrain will be offered at launch when it lands in Australia, a 2.0-litre naturally aspirated ‘Dynamic Force’ four-cylinder petrol with direct-injection. Sourced from the hatch, it produces 125kW of power and 200Nm of torque – it drives the front wheels through either a six-speed manual with rev-matching or a continuously-variable automatic transmission with 10 stepped ratios and a mechanical ‘launch gear’.

Overseas markets such as the US will get a lower-grade 1.8-litre natually aspirated four-cylinder petrol with 103kW/173Nm, while a hybrid model will be offered down the line.

Dimensionally, the new ‘rolla sedan has a wider track and is 20mm lower than its predecessor, despite its unchanged 2700mm wheelbase. It rides on the all-new TNGA platform, which has proved to be a hit in the Corolla hatch thanks to its massively improved driving dynamics and chassis stiffness. 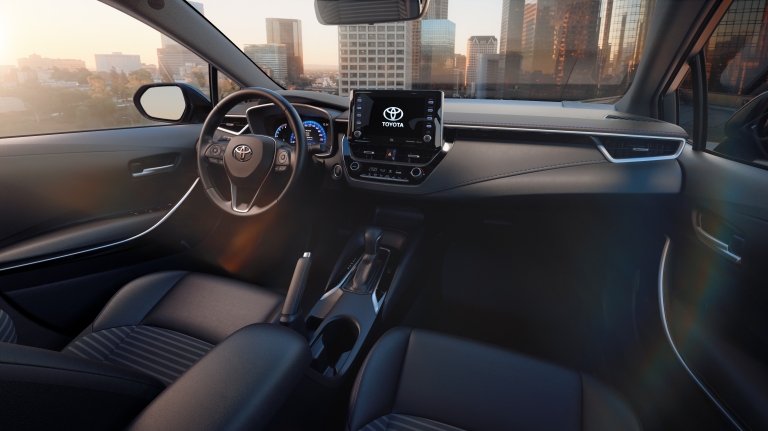 The Toyota Corolla sedan goes on sale in global markets in 2019. Toyota Australia has confirmed it won’t reach our shores for “more than a year”.