Hyundai’s largest SUV, the Palisade, has been unveiled at the Los Angeles auto show.

The Palisade is larger than the Santa Fe, and is meant to rival the Mazda CX-9, Toyota Highlander (Kluger) and Ford Expedition in the USA. It measures in at 4981mm long, 1976mm wide, 1750mm tall and bears a 2900mm wheelbase. It can seat up to eight people.

Practicality is impressive, with 510L of cargo space with the third row up, or 1297L with the third row down – however, those measurements are likely taken with the American system of measuring boot volume up to the roof as opposed to the window line.

The Palisade, despite being relatively similar in dimension to the Santa Fe, looks very different. It has a chunkier appearance, with large windows, straight body lines, a bold grille, tall lights and huge 20-inch alloy wheels (18 inches are standard).

Powering the Palisade is a 3.8-litre direct-injection naturally aspirated V6 petrol engine, which produces an ‘estimated’ 217kW of power and 355Nm of torque. Power is sent to the front or all wheels through an eight-speed automatic transmission – the HTRAC AWD system can vary the torque split between front and rear, and features a special ‘Snow Mode’.

Inside, the Palisade gets a unique dashboard layout compared to the rest of the Hyundai range – it debuts a new 10.25-inch touchscreen infotainment system, while a 12.3-inch digital instrument cluster can be optioned. Ultra-luxurious Nappa leather is available on higher model grades, while wood and aluminium trim also features on the dash and doors. The second and third rows are also well-equipped, with one-touch folding functionality, optional second-row captain’s chairs, roof-mounted air conditioning vents, seven USB ports and a mammoth 16 cupholders across all rows. 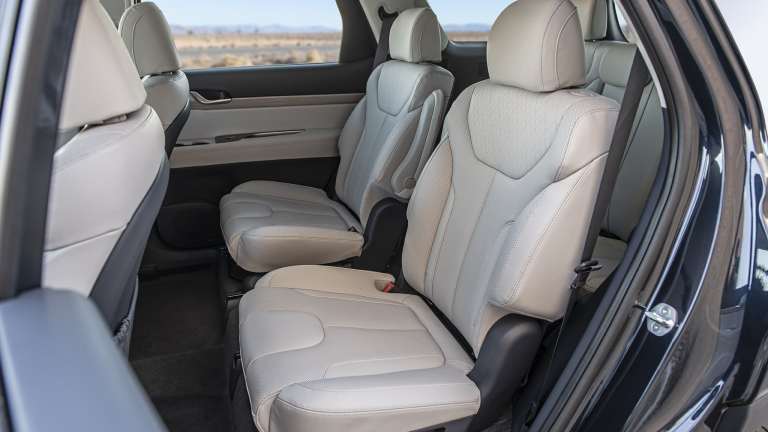 The new 2020 Hyundai Palisade lands in American showrooms in the northern summer of 2019 (June to August). Unfortunately, it has only been engineered for left-hand-drive, so it won’t be coming to the UK or Australia.