Genesis has released official images and details of the second-generation of its core model, the G80 luxury sedan.

While initial, shadowy images of Korea’s 5 Series-rival were released last month, it took until March 30 before we could catch a glimpse at its sleek body in better lighting.

The new G80 sports many of the same classy styling cues debuted on the taller GV80 SUV, namely the large crest grille up front and dual-stripe lighting signatures, the latter seen on the headlights, tail-lights and ‘connecting’ fender-mounted indicators.

Inside, the GV80 similarities continue, with a centrally-mounted 14.5-inch infotainment touchscreen with Apple CarPlay, Android Auto and satellite navigation, complemented by a 12.3-inch 3D digital instrument cluster and heads-up display. A thin Tesla-esque air vent runs across the entire width of the cabin.

The available technology suite is plentiful, including features such as ‘Remote Start Parking Assist’ allowing automated parking from the key fob, as well as an intelligent adaptive cruise control and lane-keep assist system with machine learning that adapts to the driver’s driving style.

Under its slippery sheetmetal, the new G80 rides on the same platform underpinning its SUV sibling, measuring in at 4995mm long and 1925mm wide, with a 3010mm wheelbase – 59mm, 57mm and 35mm larger in all metrics than a current BMW 5 Series. It’s also up to 125kg lighter than the outgoing G80, depending on spec.

All engines will be mated to the same eight-speed dual-clutch automatic transmission, driving either the rear or, optionally, all wheels.

The 2021 Genesis G80 is now on sale in South Korea, with an Australian launch pencilled in for the second half of the year. 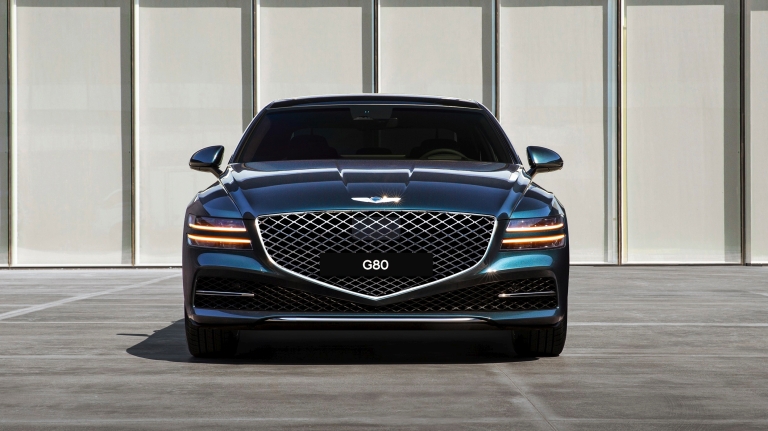 Note from the editor: despite the April 1 publication date, this is not an April Fools joke!