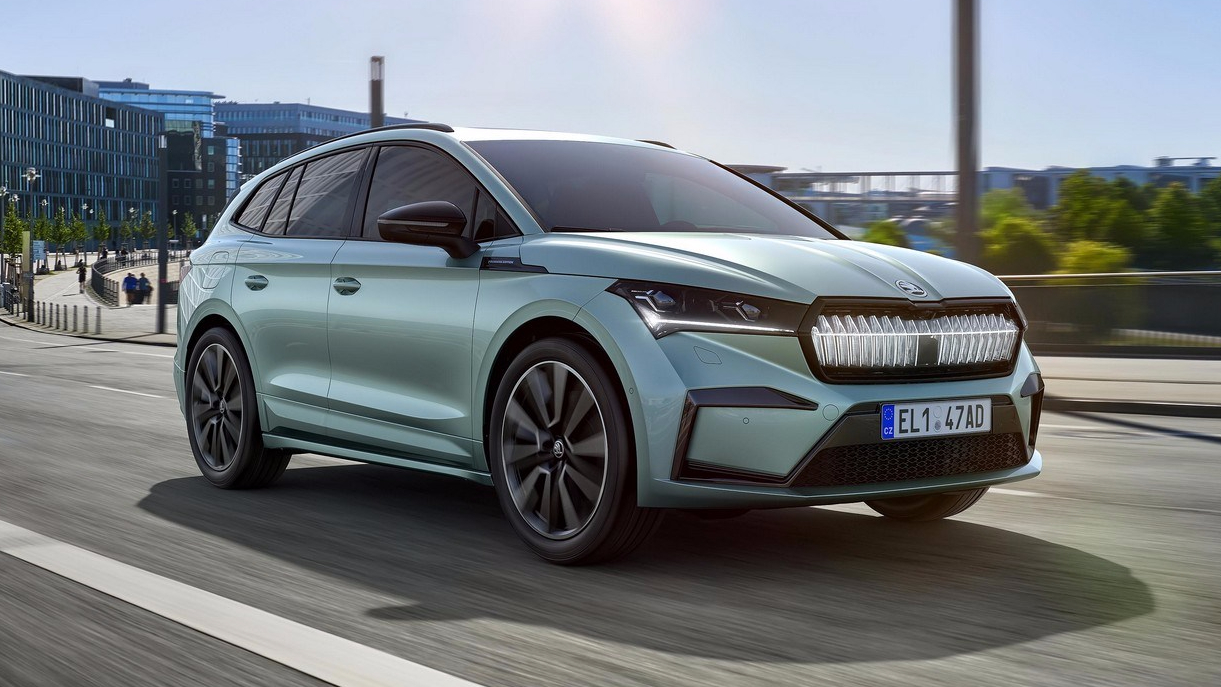 While the city-sized Citigo-e iV might hold the crown of being Skoda’s first electric vehicle, it’s the newly-unveiled Enyaq iV that marks the Czech brand’s first proper dip into zero-emissions waters. 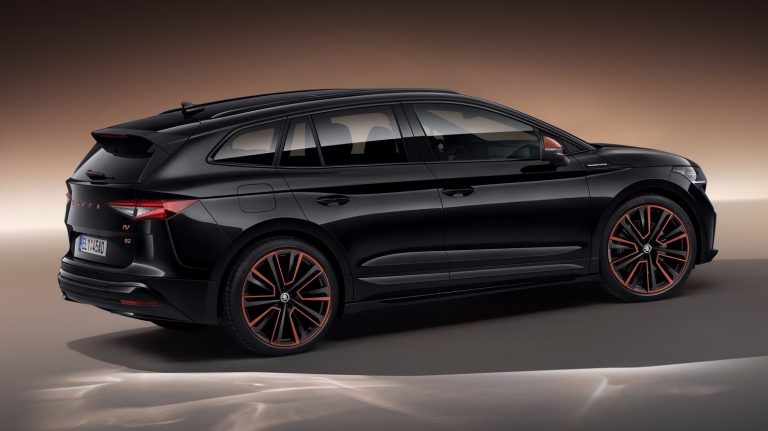 Built from the ground up as an electric vehicle, the Enyaq iV rides on the Volkswagen Group’s MEB modular electric vehicle platform, which in the coming years will go on to underpin a raft of electron-sipping models of sizes big and small.

The new electric SUV measures in at 4648mm long, 1877mm wide and 1618mm tall, making it 49mm shorter, 5mm narrower and 58mm lower than the large Kodiaq – though interior space is equivalent to the bigger combustion-powered SUV. 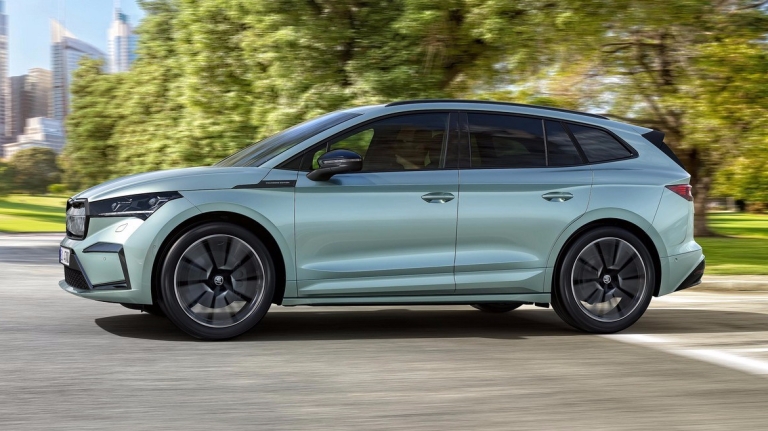 However, the EV’s wheelbase is just 26mm less – a product of the lack of a combustion engine, allowing the wheels to be pushed towards the corners of the car for improved interior space and dynamics.

On the styling front, the Enyaq iV strikes a balance between the practicality of an MPV with the more rakish look of a traditional SUV. Up front the 2019 Vision iV concept’s unconventional illuminated grille and aggressive lower fascia carry over to the production car, while the rear end is home to high-mounted LED tail-lights and a flat, elevated roofline intended to maximise practicality.

Alloy wheels ranging between 18 and 21 inches in diameter will be on offer.

Lift the rear tailgate and you’ll be treated to 585 litres of boot space – 45L down compared to the Kodiaq.

Inside, a 13.0-inch infotainment touchscreen takes centre stage, featuring Apple CarPlay, Android Auto, satellite navigation, gesture control and most of the vehicle’s settings and controls. In front of the driver is a 5.3-inch digital instrument cluster, which hides behind a multi-spoke, multi-function steering wheel. 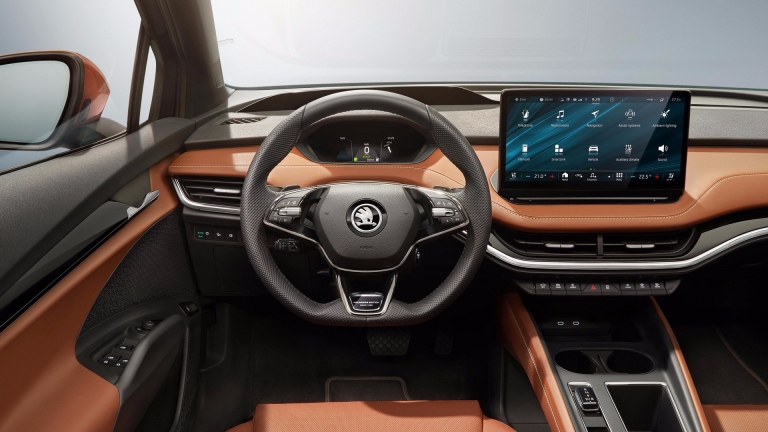 10 different interior ‘themes’ will be available, including environmentally-friendly ecoSuite and Lodge designs – the former offers renewably-produced brown leather upholstery, while the latter features seat trim made from 40 per cent wool and 60 per cent polyester constructed from recycled plastic bottles.

It wouldn’t be a Skoda without an array of handy ‘Simply Clever’ features – the Enyaq iV’s roster includes a 6.2-litre storage box in the centre armrest, an 11.4-litre storage area under the centre console and a designated storage spot for charging cables under the boot floor. 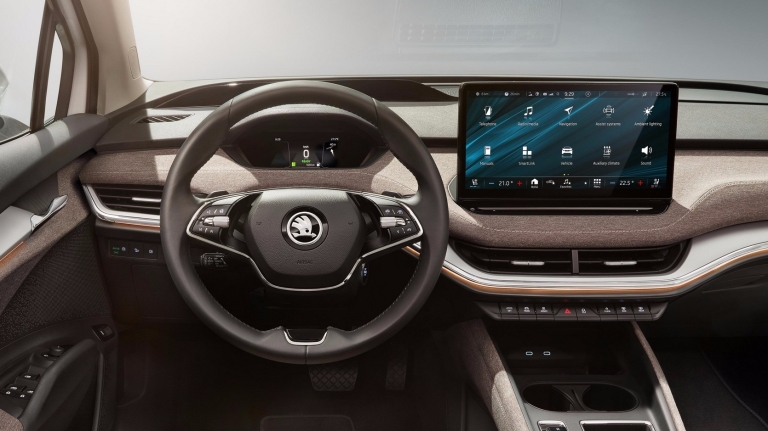 Enyaq iV buyers will have the choice between five powertrain options, consisting of three battery sizes and two drivetrain layouts.

Opening the range is the entry-level ’50’, which mates a single rear-mounted 109kW electric motor – making the Enyaq iV the first rear-drive Skoda since 1990 – to a 52kWh (all battery capacities are net) lithium-ion battery for an estimated WLTP range of 340km and a 0-100km/h sprint time of 11.4 seconds.

The mid-grade 60 ups the battery size and motor output to 58kWh and 132kW respectively, increasing range to 390km and cutting the 0-100km/h figure to 8.7 seconds. 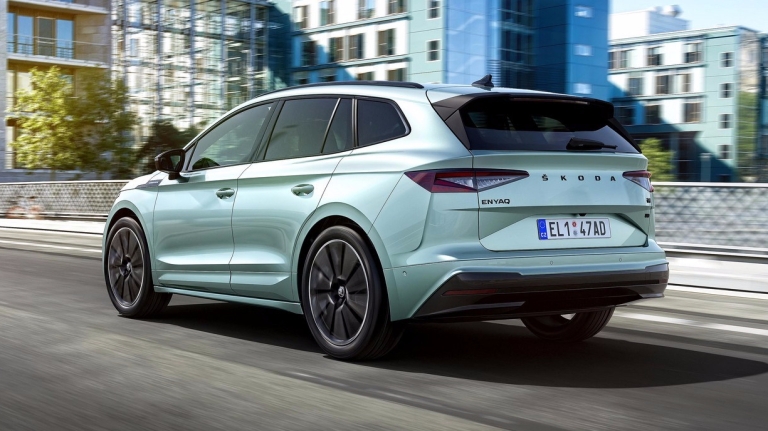 An all-wheel-drive version of the 80 is also available. Dubbed 80X, it adds another electric motor on the front axle for a combined 195kW of power, delivered from the same 77kWh lithium-ion pack.

However, the increased mechanical drag and mass of the second motor reduces the range to a still-plentiful 460 kilometres. The benchmark acceleration time also falls to 6.9 seconds. 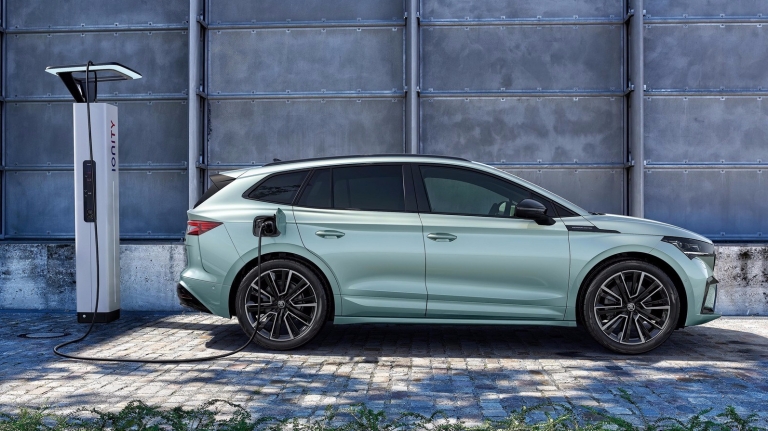 The range-topping model is the sporty RS, marking the first time Skoda’s performance moniker has been applied to an all-electric vehicle, joining the existing petrol, diesel and plug-in hybrid options offered elsewhere in the range.

The 77kWh battery and 460km range remain, but the e-motors have been fettled to develop a combined 225kW and enable a 6.2-second 0-100km/h sprint – comfortably making the flagship Enyaq the most powerful and quickest-accelerating car Skoda has ever produced, the latter figure beating the 6.6-second, turbo-petrol-powered Octavia RS and 7.0-second twin-turbo diesel Kodiaq RS. 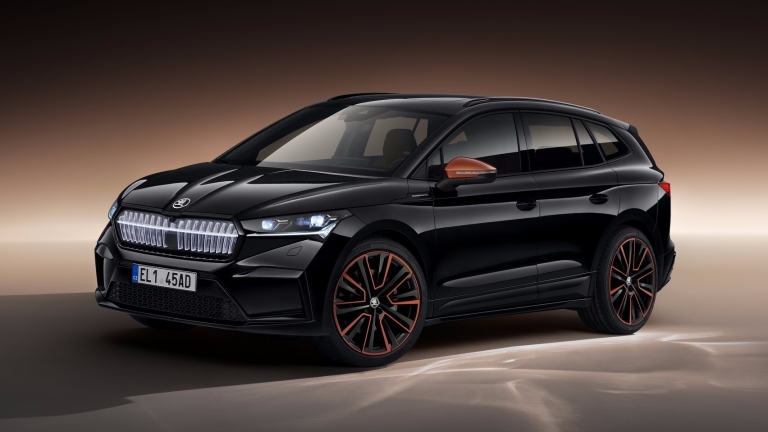 Top-spec variants score DC fast-charging at speeds up to 125kW, enabling a 5 to 80 per cent charge in just 38 minutes. 50kW and 100kW DC charging capacities are fitted to lesser models.

The 2021 Skoda Enyaq iV will enter production later this year at the Czech brand’s plant in Mlada Boleslav. An Australian debut remains unconfirmed. 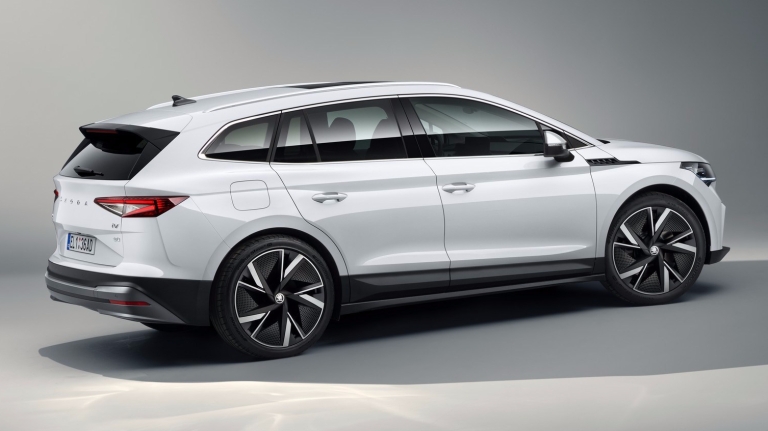