Ferrari has revealed the SF90 Stradale, its fastest road car ever. 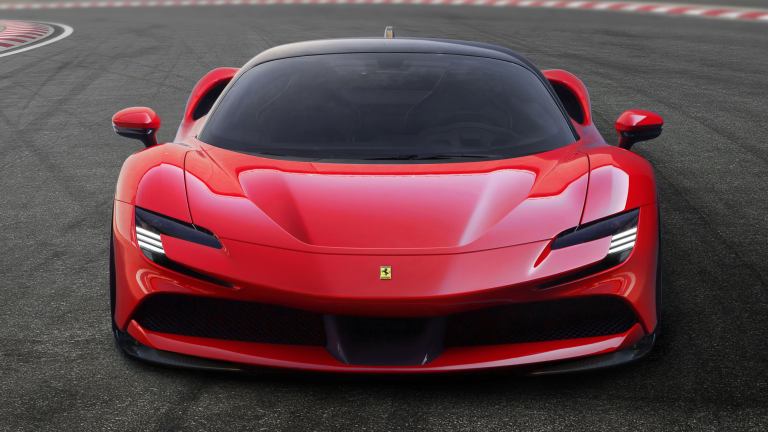 Powering the model is a plug-in hybrid drivetrain. Not only is it the brand’s first electrified powertrain, but it is its most powerful, with a total power output of 735 kilowatts (986hp).

Where does that power come from? For starters, there’s a revised 4.0-litre version of the company’s familiar twin-turbo V8 mounted behind the passengers, producing 573kW of power and 800Nm of torque. It’s complemented by a trio of electric motors – two on the front axle and one behind the gearbox – producing a further 162kW.

Thanks to its fast-shifting eight-speed dual-clutch automatic transmission and all-wheel-drive system, the Stradale can sprint from 0-100km/h in 2.5 seconds, complete the 0-200km/h run in 6.7 seconds, and achieve a top speed of 340km/h. 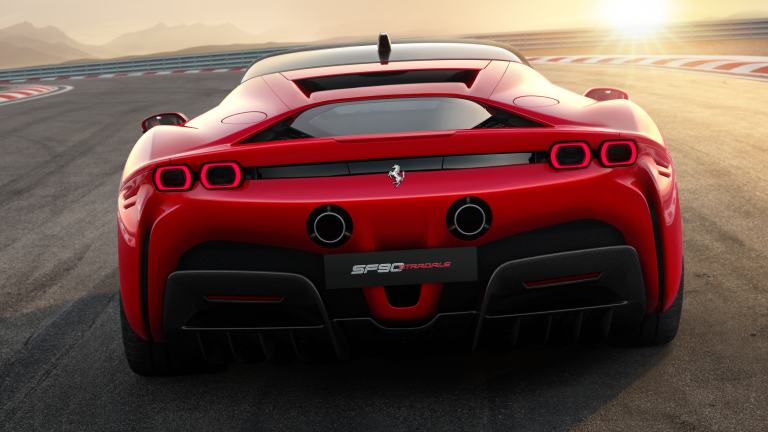 Those electric motors are fed by a compact 7.8kWh lithium-ion battery pack, which enables up to 25km of all-electric motoring, at speeds of up to 135km/h.

Four drive modes are on offer: eDrive, Hybrid, Performance and Qualify. The former two are aimed at day-to-day driving – eDrive runs the SF90 on electric power alone, while Hybrid mixes petrol and electrons depending on throttle input and road conditions. On the other hand, Performance and Qualify are intended for spirited driving – the former uses the V8 to charge the battery pack, while the latter goes all-out attack, using everything at the car’s disposal for ultimate performance.

The Stradale tips the scales in at 1570kg – relatively light for a hybrid vehicle of such performance. According to Ferrari, the battery weighs 270kg alone, meaning measures were taken to reduce the car’s weight – these include producing the area between the engine and cabin out of carbon fibre, using new aluminium alloys in the car’s space-frame structure, and lightening the gearbox by removing the reverse gear (the SF90 uses its electric motors to back up).

A lightweight Assetto Fiorano variant will be offered, which swaps the 20-inch alloy wheels and Pirelli P Zero tyres for lightweight carbon units wrapped in sticky Michelin Pilot Sport Cup 2 tyres measuring 255mm up front and 315mm at the rear.

The SF90 Stradale is a nod to Ferrari’s 2019 F1 car, the SF90, which itself signifies the 90th anniversary of the brand’s race division.

Visually, the SF90 mixes futuristic elements with various design cues from other Ferrari models. Up front, there’s a wide lower intake that feeds air up through the bonnet and over the car – it sits above a set of future-styled C-shaped LED headlights, with tri-stripe daytime-running lights. Around the side, the thin mirrors are complemented by a large black cooling vent, while at the rear there’s a pair of high-mounted dual exhausts, a tall diffuser and quad LED taillights.

The body has been designed with aerodynamics in mind, too. The rear end features an active rear wing that retracts into the bodywork at speeds (similar to DRS in Formula 1), and contributes to the car’s total 390kg of downforce at 250km/h.

Inside, a 16-inch digital display is mounted in front of the driver, which displays speed, track deltas, navigation, infotainment functions and more.