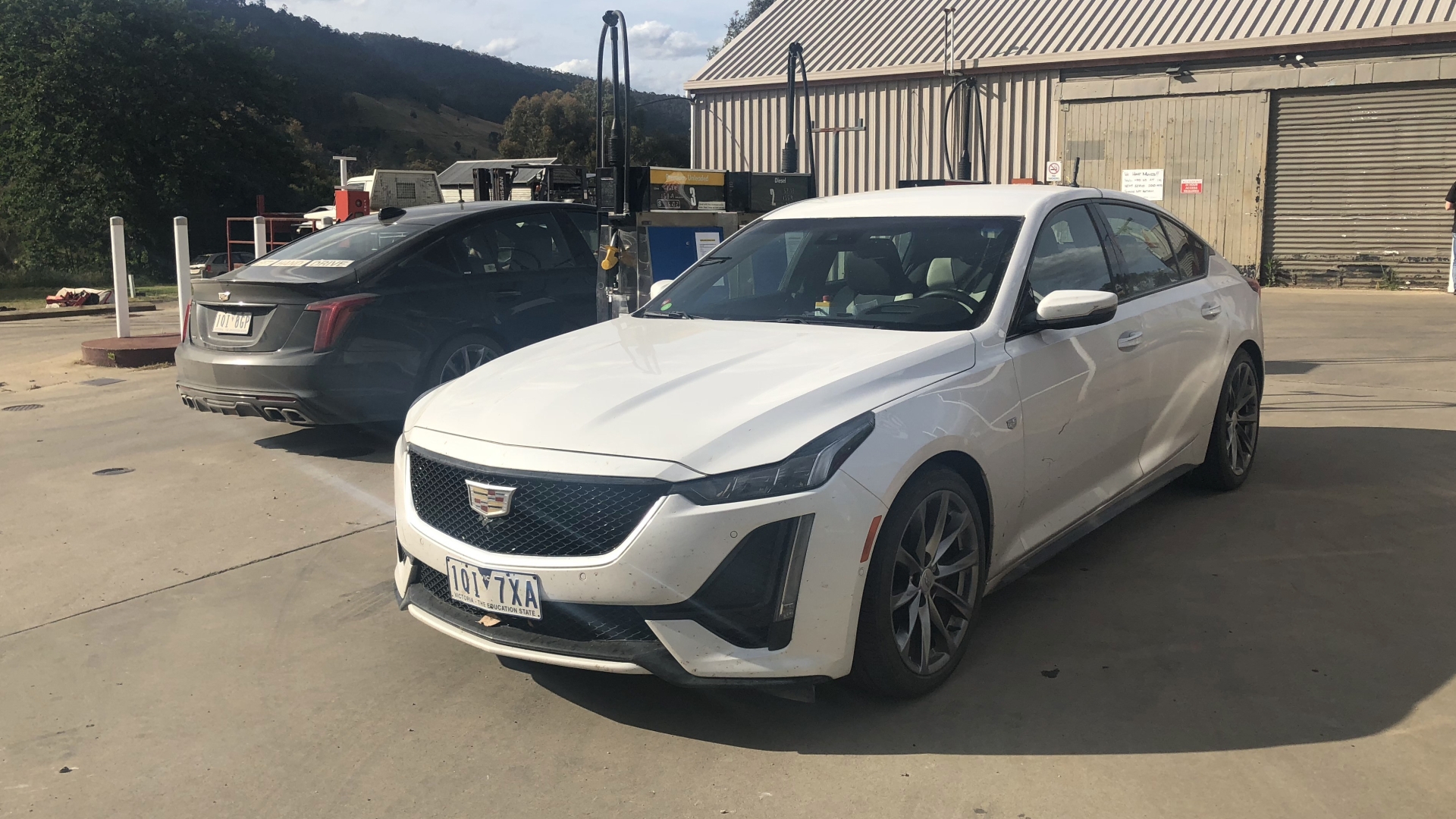 Redline has caught Cadillac’s CT5 sedan undergoing final testing in rural Australia, ahead of its North American launch in the coming months.

Two, Victorian-registered examples of the 5 Series-fighting saloon were spotted by Redline editor Alex brimming their petrol tanks in the quiet Victorian alpine town of Omeo, 420 kilometres from Melbourne.

The white and black vehicles in the images appear to be of Sport and V-Series trim levels respectively, judging by their aggressive body styling, black accents, rear lip spoilers and the latter’s quad exhaust outlets.

Under the bonnet of these CT5s is a 3.0-litre twin-turbocharged V6 petrol engine, producing 250kW of power and 542Nm of torque in the Sport, and 268kW/550Nm in the CT5-V. Both deliver power to the tarmac through a 10-speed automatic gearbox, with the V driving all four wheels – the Sport’s selected drive wheels are unknown.

Interestingly, Cadillac has only confirmed the availability of a smaller, 2.0-litre turbocharged four-cylinder engine on the Sport trim, contrary to the V6 under the bonnet of the car seen here.

Despite being fitted with recent Victorian registration plates, don’t get your hopes up on the CT5 making its way Down Under any time soon. The cars spied by Redline are both left-hand-drive – and completely devoid of any camouflage – suggesting they’re here for final validation and suspension tuning on the undulating, winding roads of Victoria’s alpine region, prior to US consumption.

While the drivers behind the wheel couldn’t confirm their employers’ identities, Omeo’s relative proximity to Holden’s Lang Lang proving ground likely suggests the drivers were engineers from the Lion brand. After all, “Holden is regularly involved in emissions and transmission calibration work on a variety of models from the GM portfolio”, said a brand spokesperson speaking to WhichCar earlier this year.

General Motors has previously flirted with the idea of bringing Cadillac to Australia, most notoriously in 2009 when the brand came one month from hitting Australian showrooms before the Global Financial Crisis forced Detroit to pull the plug.

However, with the Opel Insignia – the name under which the local Holden Commodore is badged in Europe – tipped to move to a French-designed PSA Group platform in the coming years, Holden will be forced to look for a successor to its flagship sedan, and a right-hand-drive variant of the CT5 would be a worthy candidate.

Got any spy shots or news tips of your own? Send us a link via the ‘Suggestions’ page in the menu bar!