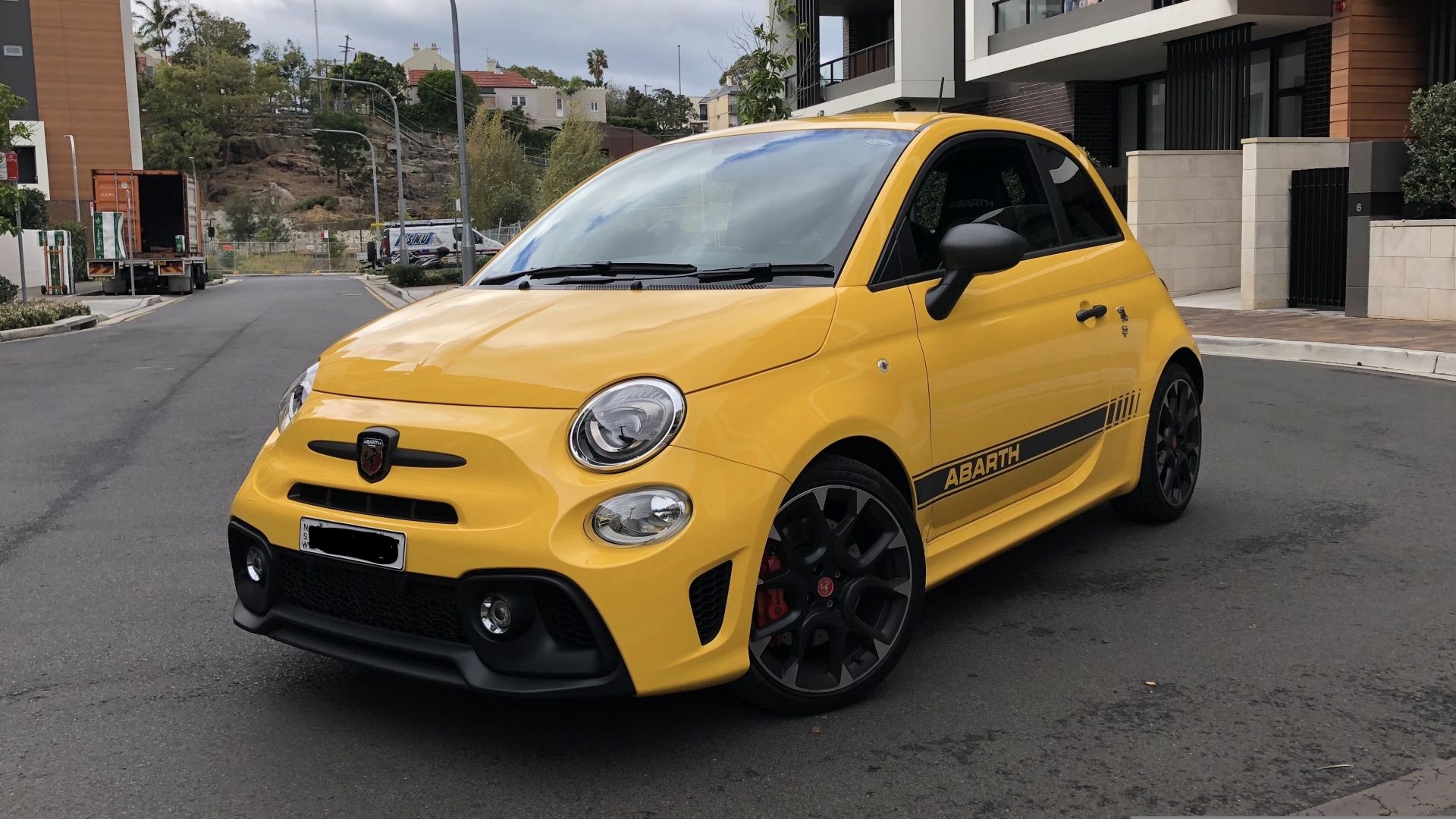 Quick note before I jump into the review: I’m a 14 year old from Sydney, and I have a passion for cars. If you are looking to buy an Abarth 595, ensure you also read and consider reviews written by other publications.

It’s November 1908, and in a hospital in Vienna, Austria, a young boy is born by the name of Carlo Abarth. By the time he was 20, Carlo has designed motorcycle chassises for Milanese coach builder Castagna, built bikes for Austrian firm Motor Thun and raced motorcycles, winning his debut race in Salzburg. Over the next 10 years, he would go on to win five European motorcycle championships, all with his own motorcycles he built, designed and maintained himself. However, after two serious accidents in 1933 and 1938, he decided to abandon his two-wheel racing career and moved to his ancestors’ hometown of Merano in northern Italy. There he met iconic racing driver Tazio Nuvolari and long family-friend Ferry Porsche (son of Beetle designer Ferdinand Porsche) and, after an unsuccessful business venture building race cars with Cisitalia, Abarth founded his own company called ‘Abarth & Co’ in 1949.

Abarth & Co began building its own sports cars based on repurposed Cisitalia designs in 1950. Two years later, Abarth signed a deal with Fiat (you may have heard of them) to manufacture performance exhausts for existing Fiat models as well as developing new factory-backed go-fast models, including the 595 based off the iconic 1968 Fiat 500. Carlo’s new company was so successful that, on the 31st of July 1971, he sold 100 percent of it to Fiat. Under Fiat ownership, Abarth entered the world of rallying, winning 3 World Rally Championships for Fiat and another 3 for subsidiary Lancia with machines like the Fiat 124 Abarth, 131 Abarth, and Lancia Rally 037.

Then, in 1981, Abarth simply ceased to exist. Fiat pulled the plug on the company, and replaced it with Fiat Auto Gestione Sportiva as the company’s performance road and race car division.

However, not all hope was lost for Abarth. In 2008, Abarth & C. S.p.a. was founded as an independent company controlled 100% by the Fiat Group. They got to work spicing up the Fiat lineup, starting by tinkering with the Grande Punto hatchback to produce a 110kW rocket that weighed just over a ton. The real game-changer came a year later, with the release of the Abarth 500 – the hot version of the retro-styled 500 city car. With styling inspired by the original 595, it zoomed to 100km/h in just 7.9 seconds thanks to its turbocharged four-cylinder engine and low kerb weight.

That brings me to the car I’ll be reviewing today, the 2018 Abarth 595 Competizione. It may look just like the hot 500 unveiled in 2008, but I assure you changes have been made under the skin to make the 595 better than ever. More on that soon.

Let’s start with the looks. As I touched on earlier, the 595 pays homage to the 1960s car of the same name. It is best described as an angry puppy – 70% cute and adorable, 30% aggressive and ready to bite something. That look is achieved primarily by the blacked-out vents in the lower front bumper, huge boot spoiler and quad exhaust tips – let’s not forget about the paint colour, aptly named Modena Yellow after the hometown of a supercar brand by the name of Ferrari.

On to the driving experience. Under that short bonnet is a 1.4-litre turbocharged inline-4 that pumps out 132kW of power and 250Nm of torque. 0-100km/h is dispatched in 6.7 seconds, on to a top speed of 225km/h… not that you’ll ever reach that on an Aussie road.

In Normal mode, the 595 feels peppy and quite quick. 132kW doesn’t sound like much on paper, but the car’s 1045kg tare mass makes it nimble and nice to drive around town – there’s always enough grunt under your right foot for any situation. That’s aided by the smooth five-speed manual gearbox, which is actually good to use in traffic – however, another speed would be useful to keep the revs down at highway speeds.

Stick it into Sport mode and the 595 really comes alive. The steering gets heavier and the throttle response is sharpened, allowing it to feel like a true hot hatchback and injecting go-kart-like handling (pardon the cliche). It sounds really darn good too, thanks to the ‘Monza’ quad-tipped active exhaust that increases in volume in Sport mode – click on the sound clip at the bottom of the review to take a listen. I do have one complaint: the ride. It is really firm, especially in Sport mode, when the adaptive dampers stiffen up – but hey, it’s an Italian hot hatchback, so there’s always going to be compromises you have to accept to enjoy the driving enjoyment that the 595 delivers.

Speaking of compromises, let’s discuss practicality and spoiler alert – it is certainly not the Abarth’s strong suit. The boot is really small, and the cabin is pretty cramped for medium to tall-height passengers. Case in point: the rear seats – they are very tight and difficult to get in to, and I wouldn’t want to be sitting there for very long. Consider the 595 a 2+2, with rear seats for occasional use.

The rest of the interior is great. The front passengers sit in leather-trimmed bucket seats which look awesome and hold you in place well during spirited driving. The dashboard is dominated by dark grey trim, which in my opinion cheapens the overall look of the cabin – some carbon-fibre-look trim would have worked much better here. In the centre of the dash is the 5.0-inch UConnect touchscreen infotainment system, new for the 2018 model year. Sadly, there’s no sat-nav to be seen here, but I really don’t think it’s necessary, as the system is nice to use and Bluetooth audio streaming and Apple CarPlay would suffice most of the time. It would be nice of the screen was a little bit larger – first-world problems. I’d be silly not to mention the cute boot-up graphic when you turn the car on – a garage door opens on the touchscreen and a little Abarth drives out. 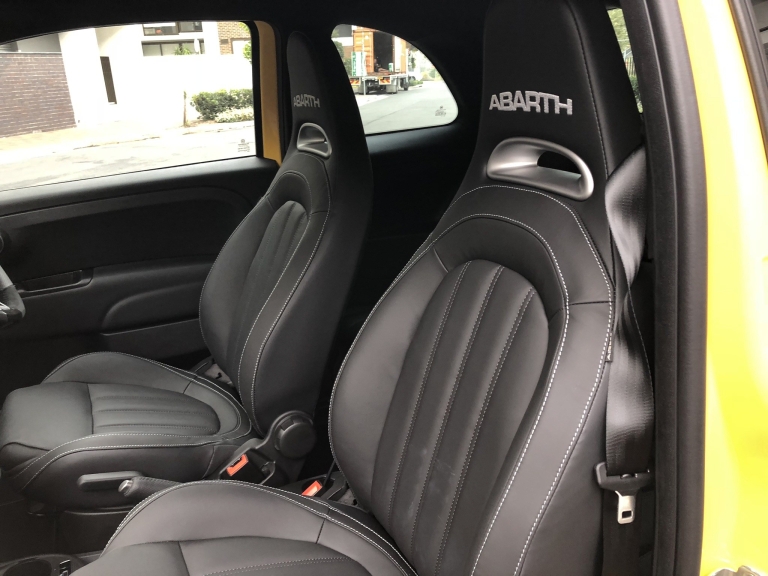 In front of the driver is a sporty steering wheel, trimmed in a mix of Alcantara, perforated leather and glossy carbon-fibre. Behind it is a fully digital instrument cluster, with two concentric circles. The inner circle displays speed and RPM, and varies based on drive mode – in Normal mode it adopts a clean, elegant design, while in Sport mode it turns red and more focus is put on the RPM gauge. The outer circle used for fuel and other metrics – when you’re in Sport mode, the fuel and temperature gauges are printed in Italian, a cute touch.

Beside the instrument cluster is a large, circular boost gauge, which activates in Sport mode (signified by the word ‘SPORT’ lighting up) to display the pressure of the turbocharger. It is a really nifty feature, and brings out your inner child – it’s fun to jump on and off the loud pedal to make the gauge go wild, accompanied by some quiet ‘stu stu’ noises from the engine bay.

Improvements for future Abarths? The main one in my opinion would be the way it rides – as I mentioned earlier, it is too stiff, and I would love to see some more comfortable adaptive dampers installed. Also, there’s some room for improvement in regards to the soundtrack – a new exhaust that pops and bangs on lift off or downshift would be perfect.

Overall, I’m a big fan of the Abarth 595 Competizione. It handles like a go-kart, it’s fast, looks fantastic and has some cool Italian quirks. Would I buy it over its rivals? For sure.